James Cawley (Kirk) in Germany
FedCon is Europe's largest Star Trek Convention. In 2010, James Cawley was invited as a guest star where he held two panel discussions with the fans. We obtained permission to film those two panels which you can now see here.
Background
We first started showing Star Trek New Voyages episodes at FedCon in 2008 and again in 2009. In 2010 we managed to get James Cawley invited to the event as a guest star!
His first panel followed the first showing of "The Child": 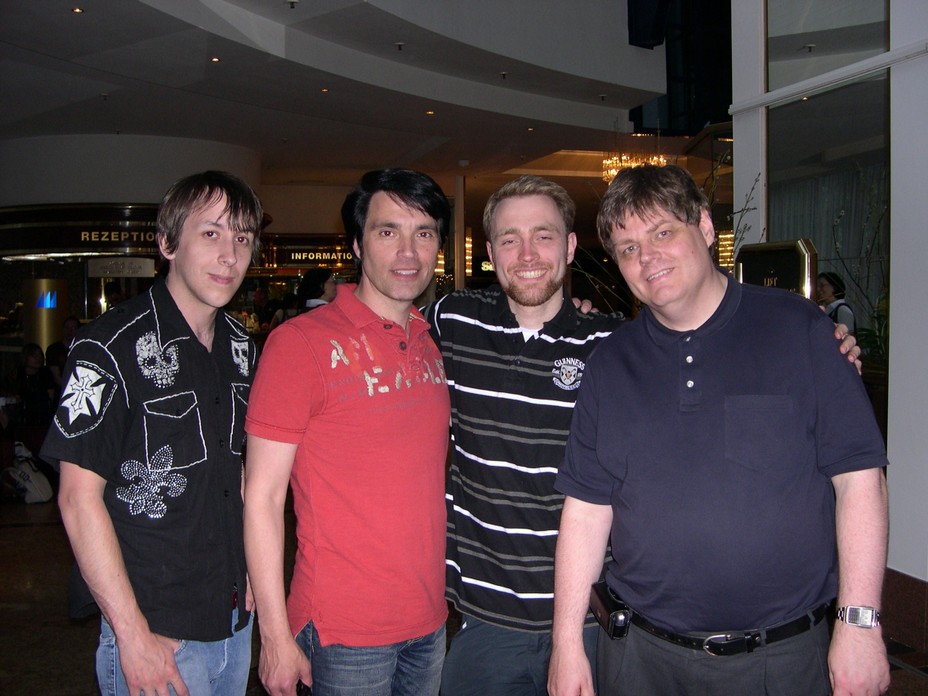 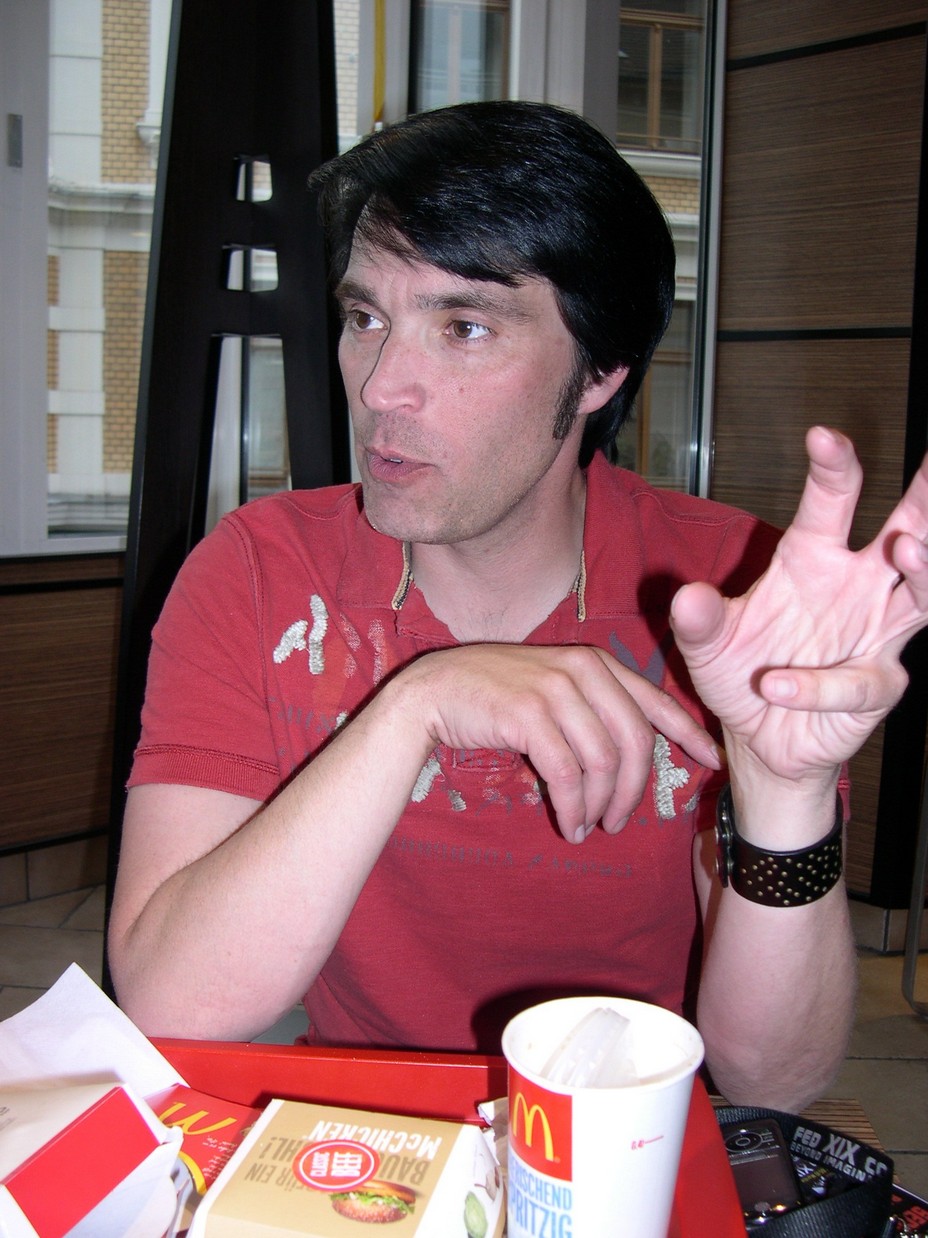 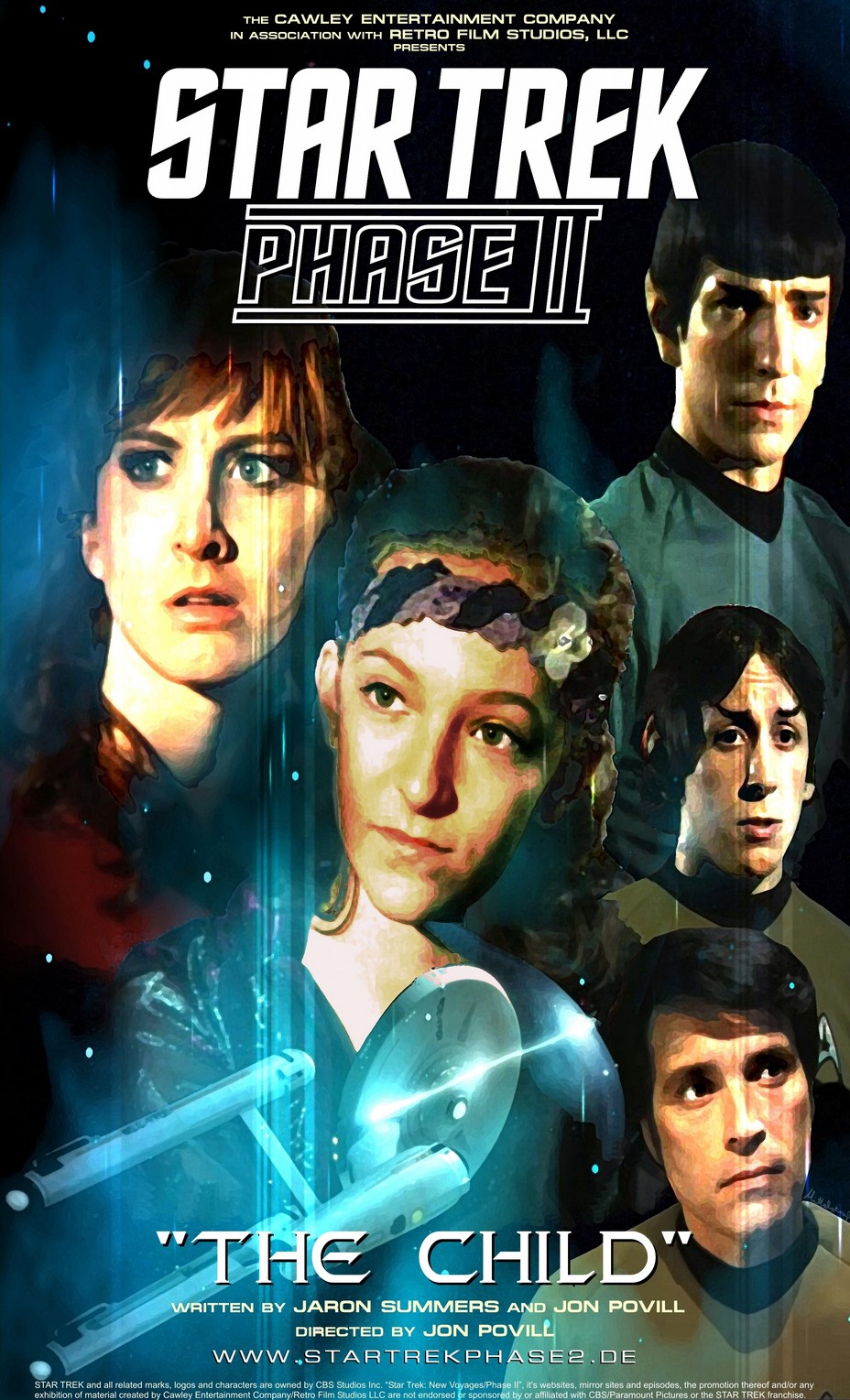 The second episode shown was Enemy Starfleet at 6pm just before the Opening Ceremony which was very well received by the fans in an almost full "Main Bridge" auditorium with an estimated 2000 fans present.
FedCon XIX - 2010 Panel James Cawley, Star Trek Phase II, Panel 1
James Cawley's first panel at FedCon 2010, held after showing a pre-release version of "The Child".
Saturday
The next morning, we showed "The Child" in the smaller auditorium to an estimated 500 guests.
We had also arranged with the FedCon staff that we could use the smaller "Salon Koch" conference room (seats about 50) to show further episodes when it was not being used for the "Wii Olympics". The only problem was the lack of an audio system so we brought our own to the show. This was also great for the "Wii Olympics" as well, as all they had was a mini speaker on the video projector (Germans call them a "Beamer"). 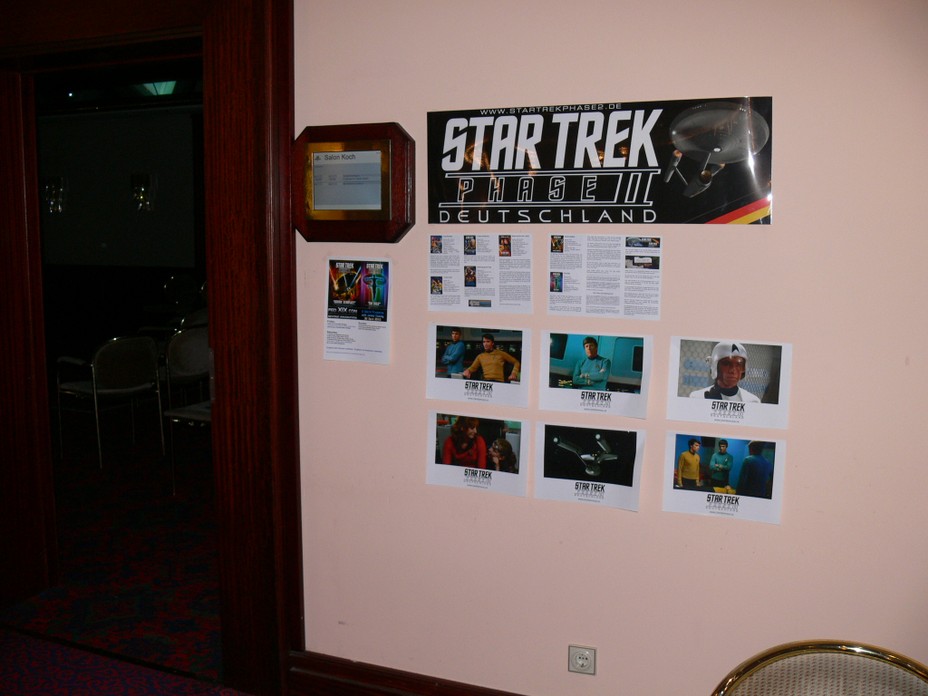 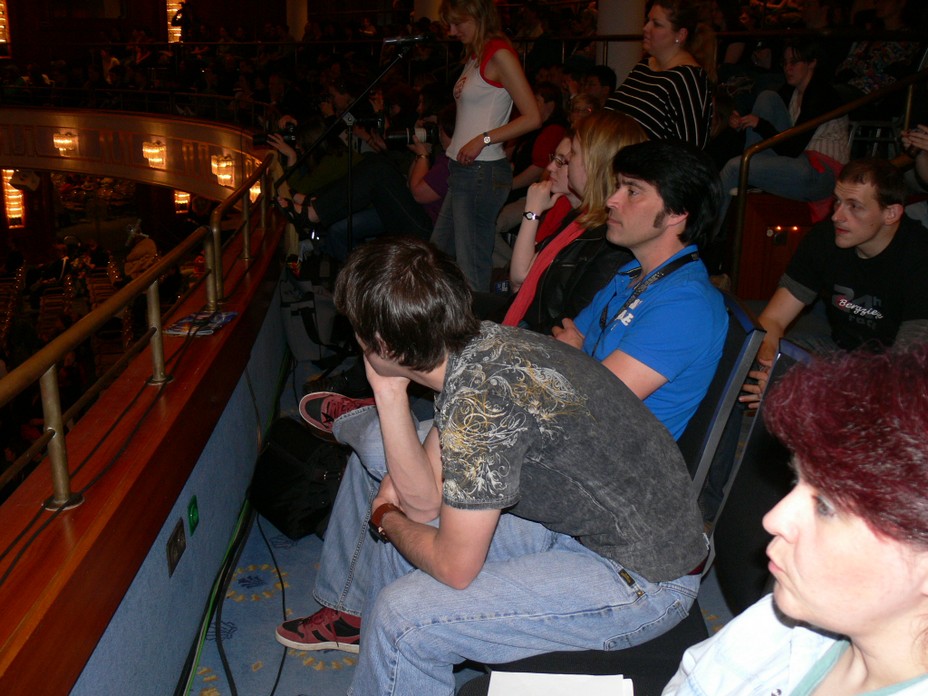 In the evening, we started to watch the costume competition from our seats on the balcony of the main bridge. James commented that the competition was much more interesting at FedCon as each contestent puts on a little show instead of just showing off their costume - this greatly added to the fun of the whole thing. Just before James was due to appear for his panel in the Holodeck, he made the comment that he did not think many people would be there as the costume contest was so good.....
We went over to the Holodeck and we were pleasently surprised to see more than 50 people all waiting for James. During his panel, that number increased dramatically, particually after the costume contest had finished..
FedCon XIX - 2010 Panel James Cawley, Star Trek Phase II, Panel 2
His second panel turned out to be excellent where many good questions were asked. For technical reasons, the recording starts about 5 minutes after his panel began. During the panel, he showed a never seen before clip from "Kitumba". The panel was so interesting that James continued his talk beyond his allocated time meaning "Enemy Starfleet" could not be shown at its full length. Luckily, we still had a possibility to show it one more time on Sunday.
After the panel, James offered the now large group of people free signed pictures and a long queue formed at the back of the room while Enemy Starfleet showed on the screen. The second panel was a great success with a lot of good questions and new info from James.
In fact the entire day was excellent and there was a great party and even a big fireworks display to round off the evening.
Sunday
On Sunday morning, we could take it easy as all we had to do is show some films in Salon Koch from 13:00 hours in the afternoon. In fact we showed three films as advertised on display panels all over FedCon. 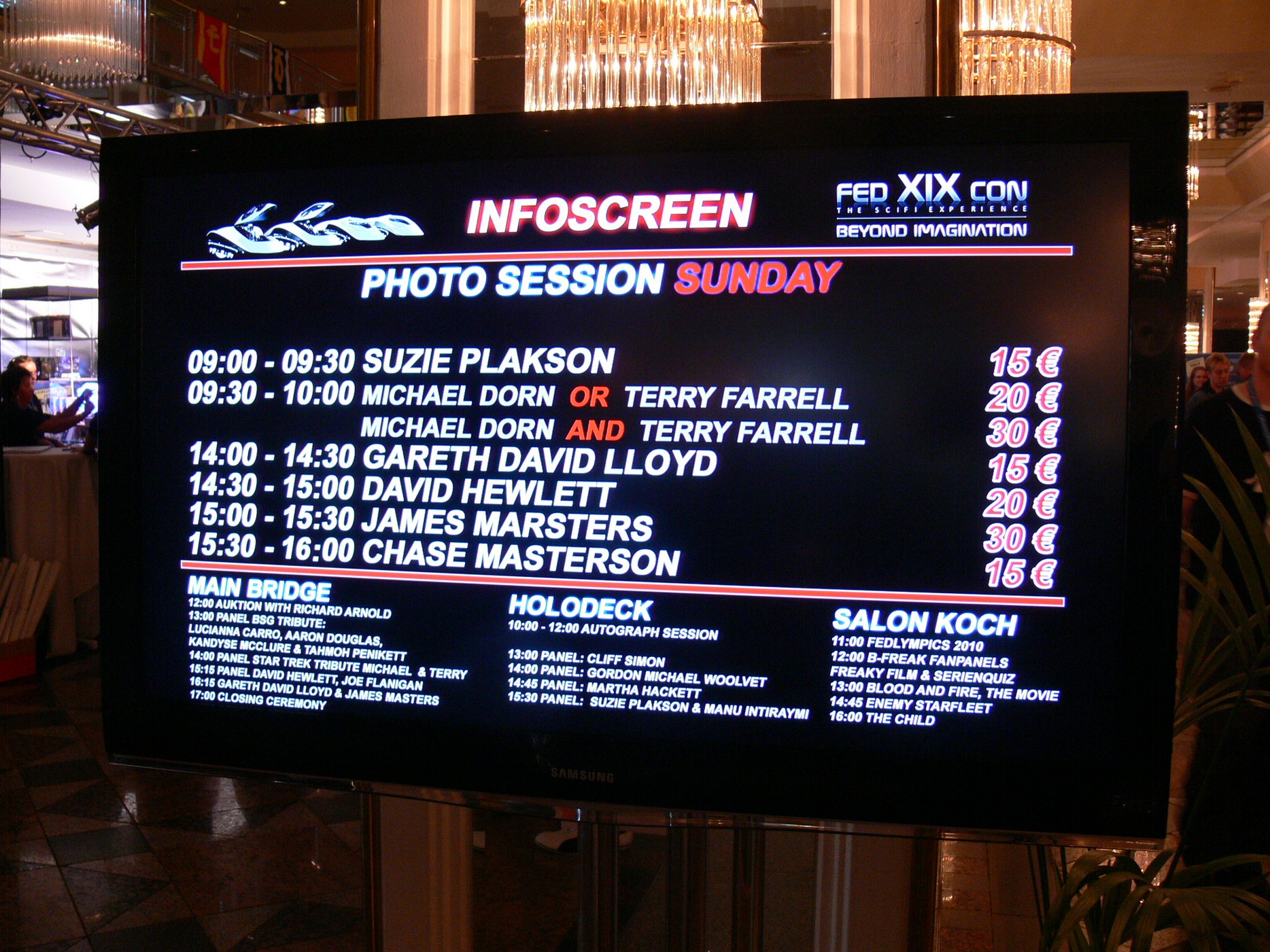 Next to Salon Koch, was a room with a TNG engineering set. This was the perfect opportunity for Captain Kirk to try out the Jefferies tube of a more advanced Enterprise..... 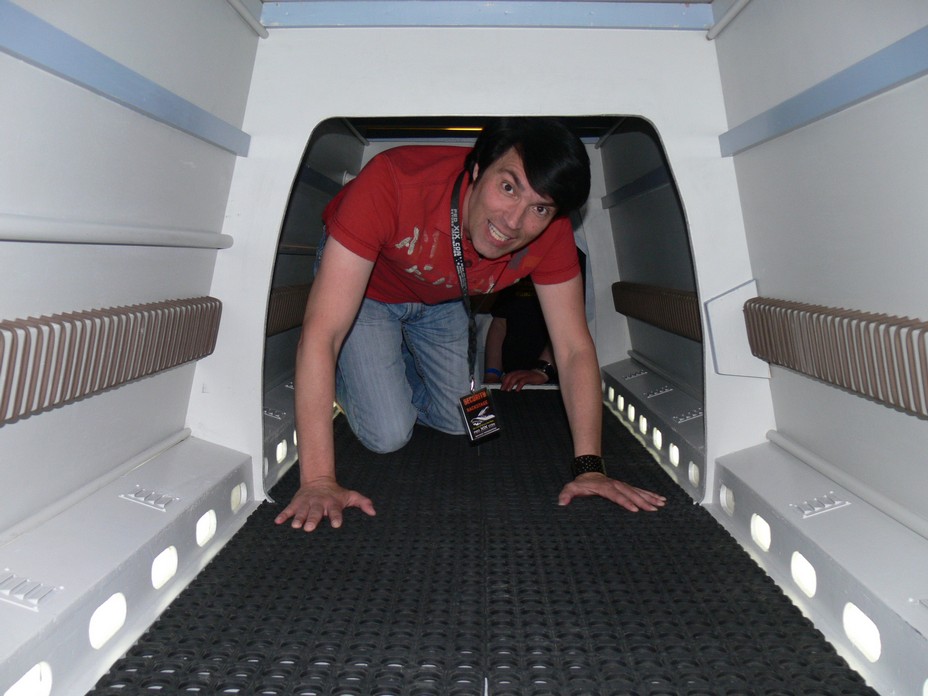 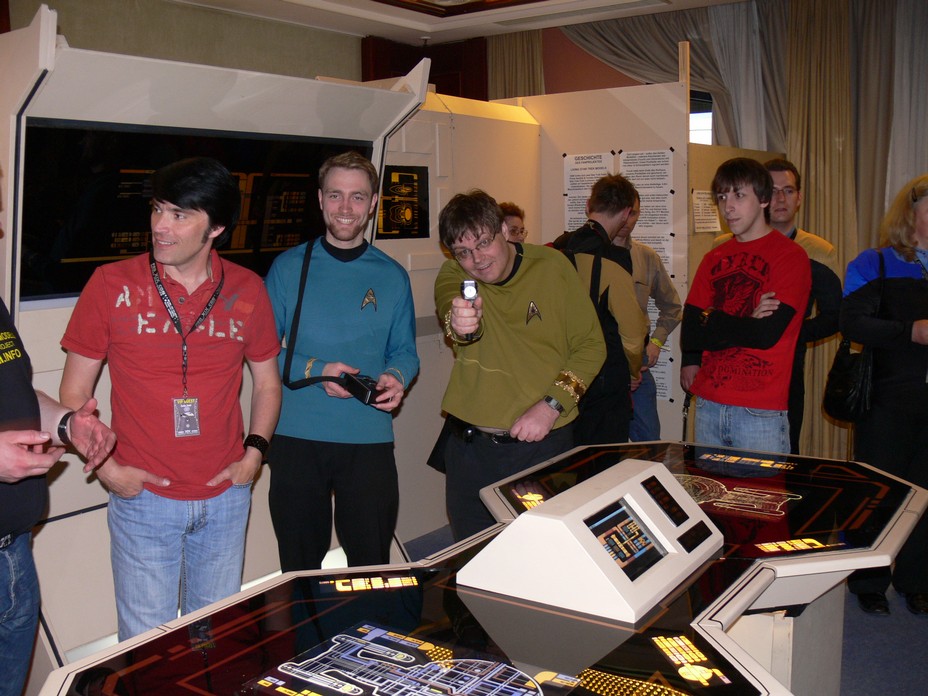